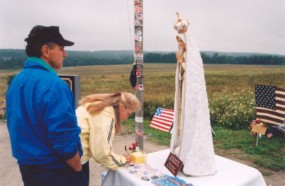 Photos and text by Bruce A. Tomaselli, The Catholic Register, Diocese of Altoona-Johnstown

Bob and Karen Kirsch of Saint Benedict Parish in Carrolltown requested the intercession of the Blessed Virgin Mary as the International Pilgrim Virgin of Fatima statue visited the site of the September 11, 2001 crash of Flight 93 in Shanksville, Somerset County. "I feel sad," said Karen, looking out over the field where the plane went down. "It shows how people gave up their lives for people they didn't know," she said. Bob was equally moved, noting, "You wonder what they could have been thinking before the plane hit the ground."

A light rain fell as visitors somberly looked out over the crash site of Flight 93 on Friday, August 13. The poignancy of the view was cemented by the gray sky and the expanse of a lonely mountain near the town of Shanksville in Somerset County.

It was there that Muslim zealots drove a plane nose first into the ground at 575 MPH killing all aboard. It was one of three terror strikes on September 11, 2001.

A two-year effort by the parishioners of Prince of Peace Parish in Northern Cambria, in particular the Altar and Rosary Society, brought one of only two replicas of the Fatima Statue in the world, to the crash site.

"We made the effort to bring the International statue here because we need to invoke the Mother of God for world peace as she did so many years ago."

The statue visited 20 places in the Diocese before a farewell ceremony was held on Sunday, August 22 at the Cathedral of the Blessed Sacrament in Altoona.

Among other stops along the way the International Pilgrim Statue has visited Garvey Manor in Hollidaysburg; and Mount Assisi and the Carmelite Monastery in Loretto.

Of course the first visit was on August 1 at Prince of Peace Church.

Father Lacovic was adamant that we must return to "spiritual renewal, to morality in America, to end war and terrorism, legalized abortion, euthanasia, and all crimes against humanity."

He said we need to return to a God - based culture once again.

Bower said she had worked and prayed for over two years to bring the statue to our Diocese. "I always felt deep in my heart that it was important to make a visit to the Flight 93 temporary memorial site." Plans are underway to preserve the area as a National Park. 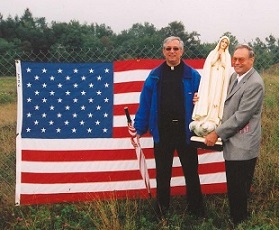 AT CRASH SITE: Father Lawrence Lacovic, pastor of Prince of Peace Parish in Northern Cambria, and Carl Malburg, caretaker of the International Pilgrim Virgin of Fatima Statue, received the privilege of taking the statue to the fence marking the perimeter of the actual place where Flight 93 crashed on September 11, 2001. At the site they prayed for the victims of the crash, and for world peace.

Father Lacovic led a group from Prince of Peace Parish and others from around the Diocese, in recitation of the entire 20 mysteries of the Rosary in tribute to the Blessed Mother.

After devotions to the Blessed Mother, officials of the Flight 93 temporary memorial graciously allowed the statue to be carried to the hallowed crash site, which is fenced off as a sacred and solemn place. Only family members of the victims are permitted in the area. Father Lacovic and Carl Malburg, its caretaker, made the several hundred yard walk from the road to the site. There they paused to pray for the victims and peace in the world.

The replicas of the original Fatima statue of the Virgin Mary are carved from wood and stand about four feet high.

In 1917 Our Lady of Fatima, Portugal, addressed a similar situation, when she appeared six times to three shepherd children between May 13 and October 13 of that year, at a time when civilization was being torn apart by World War I and other bloody violence.

She told the children as the Mother of God she was sent to promise that heaven would grant peace to all the world, if her requests for prayer, reparation and consecration were heard and obeyed.

Malburg, a resident of the state of Indiana near the city of Chicago, has been the caretaker of the statue for the past 11 years. He has accompanied the statue in visits to over 100 countries and all the continents.

"I travel about 11 months out of each year and three weeks each month," said the soft-spoken man. He's been to 25 or 30 countries so far this year.

Malburg, who only handles the statue while wearing white gloves, said he purchases plane tickets for the Fatima statue because it is too valuable to be put in a cargo hold. "I get a lot of looks when I sit down on a plane next to the statue," he laughed. Malburg said the other passengers are very respectful. The generous support of the public keeps the statue traveling the world.

Malburg said he's seen many miracles performed through the statue. "I've seen many remarkable physical cures," he said. "It is God showing us that we should pay attention to what the Fatima statue is representing – that if we please God, He will bless us," Malburg reminded.