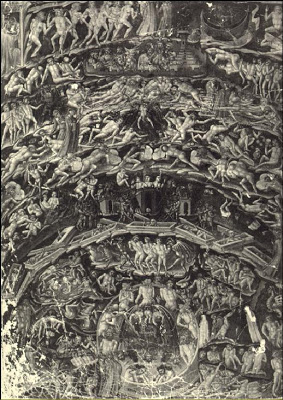 By the Late Fr. Marcel Nault

When I am invited to preach, I remember the words of Jesus:

"The Holy Spirit will speak in you and through you."

When I think about the Apostles, I don't imagine them going from town to town with their computers, their microphones, their recording machines, their filing cabinets. They went and let the Holy Spirit speak because it is the Holy Spirit that changes the heart of sinners.

I put all my trust in the wisdom and the strength of the Holy Spirit. I preach everywhere the message of Our Lady of Fatima. What will I preach? I preach what I think are the most important teachings of Our Lord Jesus. When Jesus came on earth, He came for one reason: TO SAVE SOULS FROM HELL.

Some people say it is better to preach on Heaven. I believe that the more a person meditates on that truth that we call Hell, that meditation produces many fruits of conversion.

Why do you think St. Augustine changed his life? Because of the fear of Hell. Pope Pius IX, who gave us the Roman Catholic Dogma on the Immaculate Conception, asked priests to please, please preach more often on Hell.

Blessed Mary, Our Lady of Mount Carmel, appeared to St. Simon Stock and told him:

"Don't be afraid anymore; I am giving to you Carmelites a special vestment (the Brown Scapular); all those who will die wearing that vestment will not go to Hell.

I wear the Brown Scapular inside my vestment, and I have another one in my pocket because I never know when people will ask me to preach. When I preach, I also preach the Holy Rosary, and enroll them in the Brown Scapular.

When Our Lady appeared at Fatima on July 13, 1917, She came as a prophet sent by God to save souls from Hell, through Her prayers and through the Five First Saturdays.

Our Lady showed Blessed Jacinta, Francisco, and Lucia a vision of Hell. Each time you say the Rosary, do say after each decade: "O MY JESUS, FORGIVE US OUR SINS, SAVE US FROM THE FIRES OF HELL, AND LEAD ALL SOULS TO HEAVEN, ESPECIALLY THOSE IN MOST NEED OF THY MERCY." The Blessed Virgin Mary came to Fatima to save souls from Hell.

The Curé of Ars, the patron of all parish priests, preached that the greatest act of charity towards our neighbors is to save souls from Hell. One day when he was hearing confessions, the Devil appeared as a man, enraging and screaming, "I hate you, I hate you because you stole from my hand thousands of souls."

When you read the Fathers of the Church, the Doctors of the Church, the Saints, you are struck by one thing; they all preach the Holy Gospel of Jesus, Heaven, Purgatory, and they never fail to preach on the Roman Catholic Dogma of Hell because when we meditate on hell we can become a saint.

In many dioceses, I often hear the clergy recite the Rosary but they decline to say the little prayers after each decade because "the people don't like that." WE ARE NOT THERE PREACHING TO PLEASE THE CROWD BUT TO SAVE SOULS, TO PREVENT THEM FROM GOING TO HELL FOR ALL ETERNITY. And I think the little prayer of Our Lady of Fatima given to the children is more powerful and more pleasing to God than any kind of meditation.

There are many revelations that we can read in the holy books, and some souls in Hell have spoken, given the privilege by God, to help us in our faith. Those souls in Hell would say, "WE COULD ACCEPT TO BE IN HELL A THOUSAND YEARS. WE COULD ACCEPT TO BE IN HELL A MILLON YEARS, IF WE KNEW THAT ONE DAY WE WOULD LEAVE HELL." But, no, my friends, we must meditate, not only on the pre-destination of seeing God in Heaven, we must also meditate on the eternity of Hell.

My friends, Hell exists. Hell is eternal. I can go into Hell. You can go into Hell. And if God had called me to my Eternal Reward some years ago, I would have gone to hell for all eternity, weeping, crying. Not for a million years, not for a thousand, millions years, but for all eternity. Pray the Rosary everyday. Wear the Brown Scapular, make the First Saturdays. Go to confession and receive Holy Communion often. Remember what Our Lady said to all those who make the Five First Saturdays: I PROMISE TO ASSIST THEM AT THE HOUR OF DEATH, WITH ALL THE GRACES NECESSARY FOR THE SALVATION OF THEIR SOULS…"

FOR THEIR WOMEN HAVE EXCHANGED THE NATURAL USE OF THAT WHICH IS AGAINST NATURE, AND IN LIKE MANNER THE MEN ALSO, HAVING ABANDONED THEIR NATURAL USE OF WOMEN, HAVE BURNED IN THEIR LUSTS ONE TOWARD ANOTHER, MEN DOING SHAMELESS THINGS AND RECEIVING IN THEMSELVES THE FITTING RECOMPENSE OF THEIR PERVERSITY.

And as they have resolved against possessing the knowledge of God, God has given them up to a Reprobate Sense, so that they do what is not fitting; being filled with all INIQUITY, MALICE, IMMORALITY, AVARICE, WICKEDNESS, BEING FULL OF ENVY, MURDER, CONTENTION, DECEIT, MALIGNITY, BEING WHISPERERS, HATEFUL TO GOD, IRREVERENT, PROUD, HAUGHTY, PLOTTERS OF EVIL, DISOBEDIENT TO PARENTS, FOOLISH, DISSOLUTE, WITHOUT AFFECTION, WITHOUT FIDELITY, WITHOUT MERCY.

Although they have known the ordinance of God, they have not understood THAT THOSE WHO PRACTICE SUCH THINGS ARE DESERVING OF DEATH. AND NOT ONLY DO THEY DO THESE THINGS, BUT THEY APPLAUD OTHERS DOING THEM."

The Three Secrets of the Fatima Message

The First Secret: THE HORRIBLE VISION OF HELL

The Second Secret: The salvation of souls through the sorrowful and immaculate Heart of Mary (through the Five First Saturday devotions)

The Third Secret: The angel with his fiery sword calling out, "Penance, penance, penance ready to destroy the earth." As Our Lady said, "Several nations will be annihilated" if we do not establish in the world devotion to her Immaculate Heart through the First Saturdays.

Our Lady said to me (Sr. Lucia): "Sacrifice yourselves for sinners and say many times, especially when you make some sacrifice: 'O My Jesus, it is for your love, for the conversion of sinners, and in reparation for the sins committed against the Immaculate Heart of Mary.'"

When Our Lady spoke these last words, She opened Her hands as She had in the two months before. The Radiance seemed to penetrate the ground and we SAW SOMETHING LIKE A SEA OF FIRE.

Plunged in this fire were the demons and the souls, as if they were red-hot coals, transparent and black or bronze-colored, with human forms, which floated about in the conflagration, borne by the flames which issued from it with clouds of smoke falling on all sides as sparks fall in great conflagrations without weight or equilibrium, among shrieks and groans of sorrow and despair that horrify and cause people to shudder with fear.

The Devils were distinguished by horrible and loathsome forms of animals frightful and unknown, but transparent like black coals that have turned Red-Hot. Frightened and as if we were appealing for help, we raised our eyes to Our Lady who said with tenderness and sadness:

YOU HAVE SEEN HELL, WHERE THE SOULS OF POOR SINNERS GO. TO SAVE THEM, GOD WISHES TO ESTABLISH IN THE WORLD DEVOTION TO MY IMMACULATE HEART." (Through the five First Saturdays)